The great people at Wonderful Machine showed my portfolio around some agencies in SF last week... Thanks Maria and Jared!


My portfolio is on video below; check it out!

by Jared Gruenwald
Our San Francisco excursion got off to a rather early start, as we arrived Wednesday morning at around 1 AM. We’d flown straight from our meetings in Salt Lake, and to us EST folks, it felt like more like 3 AM. But the moment I stepped off the plane with a bleary-eyed Maria Luci, I felt at home. I spent an incredible two years in San Francisco, and upon return, experienced a heavy dose of nostalgia. But I pushed through the feelings long enough so that we could pick up our sweet ride, and after a roller coaster of construction detours that almost landed us on the Bay Bridge, we finally arrived at The Hotel Carlton. The place was great—our only issue was maneuvering the hand truck and portfolio cases through the historic building’s narrow hallways and tiny elevator. But we eventually made it up to our rooms where we each promptly passed out.
After such successful meetings in Salt Lake City, I was excited to get the ball rolling in San Fran. So I hardly felt the jet lag as we burst outside. First, Maria and I headed to OgilvyOne where we met with Creative Director Jennifer Anderson. Jennifer was very interested in finding new travel/lifestyle photographers and fortuitously found herself flipping throughJayms Ramirez’s portfolio. She was impressed with both his and Mike Tittel‘s books, and quickly called our home base back in PA to find out more about our other travel photographers.

Jennifer and Maria chat about Wonderful Machine.
Jayms Ramirez portfolio video:
After Jennifer popped out for another meeting, we left Ogilvy and found ourselves with about an hour to eat before our next meeting. So, I decided to take Maria by my old neighborhood, Alamo Square, for a quick bite at the Blue Jay Café.

The painted Ladies of Alamo Square.
After a pleasant meal that included some savory cauliflower soup and a waiter who labeled us flamboyant (and that’s saying something in San Francisco), Maria and I hopped back into the Wonderful Machine Mobile (aka a rented mini van) and blasted off to Duncan/Channon. There, we met with an eager group of creatives including Co-Founder/Executive Creative Director, Parker Channon. Everyone was extremely fun, chatty and happy to see both familiar faces and local photogs not yet on their radar, including Anthony Lindsey, James Wirth, and Michael Winokur.

D/C creatives review portfolios.
With a half hour to spare, we decided to push our cart through the streets to our next meeting at AFAR. We both prayed we wouldn’t encounter any major hills along the way—and luckily, we didn’t. We even arrived early and were greeted by Photo Assistant Dani Vernon who set us up in a conference room to prepare a presentation for Photo Director Tara Guertin. After we laid out the relevant books, Tara came bursting into the room like a great ball of energy. She was enthusiastic and friendly and I immediately knew this was going to be a good meeting. We didn’t have to go into the regular spiel explaining Wonderful Machine, as Tara frequents our site and often relies on it as the first stop on her journey to hire a photographer. She was also very familiar with our roster and recounted a hilarious story involving Austin-based shooter Jody Horton, insular communities, and chicken fried steak. This meeting was more of an “it’s so nice to finally meet you in person” get together, as we’ve been working with Tara from a distance for quite some time. On our way out, we chatted about our Barbados shooter Mark King as she handed us a pile Afars to keep us occupied during our long journey home.

Arms full of magazines, we made it back to the car and shot off to our last meeting of the day with ATTIK, a creative communications firm. There we met one on one with Sr. Producer Michelle Mintz. She was primarily interested in automotive photography, so we wowed her with the portfolios of Michael Alan Ross, Dom Romney, John Early and James Wirth.  She was blown away by Michael’s shots of old school hot rods on the Bonneville Salt Flats and loved Dom Romney’s portfolio, which doubles as a leave behind. She was also very interested in our stock services.
John Early’s portfolio video:
After mentioning that this was our last meeting of the day, she told us we had to check out a new Mexican joint calledTacolicious. I was all set to take Maria to my old burrito spot, El Farolito, but it’s hard to argue with a local, and I’m all for trying something new. After a brief stop at one of the coolest stores in town, Paxton Gate, we found ourselves gorging out on some of the best taco’s I’ve had in decades (yeah decades, and I’m not yet thirty). “Best tacos of my life!” – Maria. Thanks, Michelle!

Tacolicious!
The tacos were so amazing, we entered a time warp and before we realized it was 6:00 PM. We paid the tab and rushed over to Nob Hill’s Big Foot Lodge to meet up with some of our San Francisco photographers for Happy Hour. This was definitely my type of bar: dark, crowded, walls lined with taxidermy, and a giant carved Bigfoot lording over all the bar flies. It was a great “meeting”. From Terri Loewenthal showing up with deliciously sweet strawberries (“best strawberries of my life!” – Maria) to Michael Alan Ross and Anthony Lindsay throwing down Wonderful Machine gang signs everyone had a blast. After a few hours, several beers and a Manhattan…or five, the party died down. Victor Wang, the last standing photographer, offered us a ride “home” in his monster truck and that was the end of a very long but very successful first day in the city by the bay.

Happy Hour! From left: Winni Wintermeyer, Victor Wang, Maria, Tai Power Seeff. In mirror: Terri Loewenthal, Anthony Lindsey and Michael Alan Ross.
Day two began as beautifully as day one. Weather is San Francisco can be a bit of a gamble and we hit the jackpot.  Meeting number one took us to AirBnB. I would have been satisfied just sitting in their offices all day watching people whiz on by. The space was incredible; it was bright, open, plastered with eye candy and topped off with skee ball and a kitchen with made-to-order breakfast. Not too shabby. Initially I wasn’t sure what use they had for commercial photography, as most of their content is user generated. However, Photo Consultant Rebecca Horne explained that they were looking to add “visual city stories” to the site to help give a sense of place. They were particularly interested in photographers who could blend lifestyle and reportage seamlessly. They especially liked the style of Ramin Rahimian. Basically, she was looking for photographers who could capture the beautiful raw essence of a city or neighborhood with limited need for production. Not everyone we met with was familiar with our site and were thrilled to learn that they could use our simple search feature to find photographers to suit their needs worldwide. No more cold Googling. You’re welcome.

AirBnb review.
Ramin Rahimian’s portfolio video:
After AirBnb, had a bit of time before our next meeting, and since it was so nice out, I thought a quick tour of the city would satisfy Maria’s desire to get a feel for SF, as this was her first visit. So, after catching up on some work emails, we headed off into the city. Without writing an essay, let’s just say we saw just about everything during my speed tour. We whizzed by Baker Beach and Twin Peaks, to the Haight and Fisherman’s Wharf, to Lombard Street and Hayes Valley and the Castro. Perhaps I should moonlight as a SF tour guide?

Jared’s San Francisco Speed Tours – See it all in less than two hours!
As the three o’clock hour approached, we packed it in and headed over to Dwell for our final meeting. Everyone we met there was incredible nice. We chatted primarily with Photo Editor Julia Sabot, while Creative Director Alejandro Chavetta kept popping over to turn a few portfolio pages. Julia, who was fairly familiar with our site and some of our photographers, was impressed with the caliber of books we shared. She especially enjoyed Derek Israelson, Naoko Kakuta and Sherry Heck’s portfolios. We had a chat about digital vs. print books and she says she still loves the tangibility of flipping through pages and receiving promos in the mail, so don’t go entirely digital just yet.

Julia looks through Sherry’s iPad.
Naoko Kakuta’s portfolio video:
After that final meeting, we took a drive back to the hotel, packed up our cases and set out for one last jaunt. I took Maria to a sushi restaurant I used to frequent (Kyoto on Van Ness). Great food and .99 cent Sapporo’s. Can’t beat that. We had a lovely meal then called it a bittersweet night knowing that upon waking we’d have to leave. I had an incredible time and meet some great people—but it was also quite the whirlwind and we were both quite sleepy on the plane back to Philly. Thanks San Francisco, but I’d like my heart back now.
Posted by Unknown at Tuesday, April 30, 2013
Email ThisBlogThis!Share to TwitterShare to FacebookShare to Pinterest

A few recent environmental portraits in SF of a Software guru.... 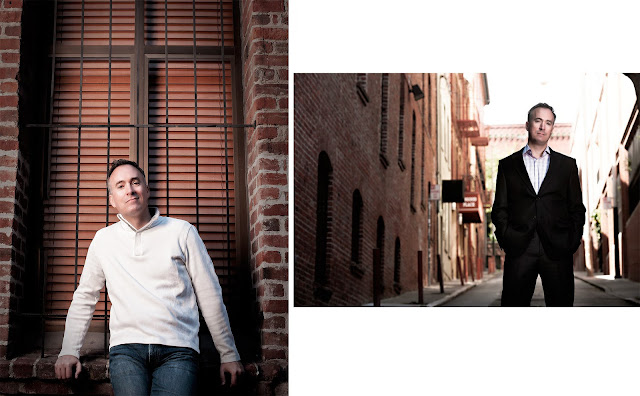 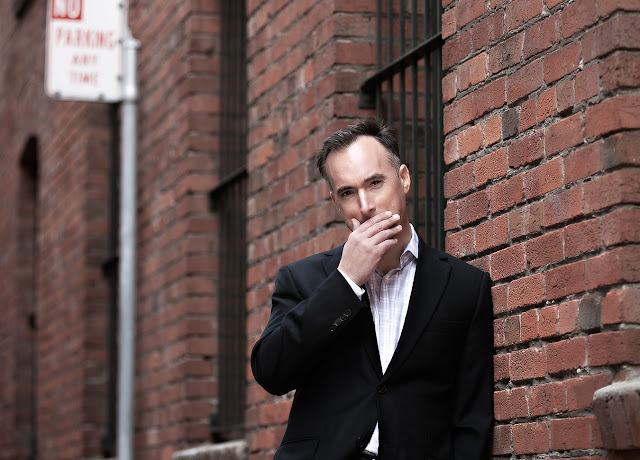 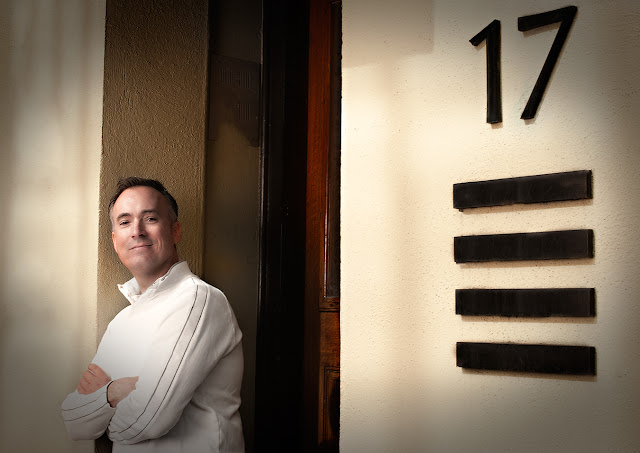 Posted by Unknown at Monday, April 29, 2013
Email ThisBlogThis!Share to TwitterShare to FacebookShare to Pinterest

My Cover shoot of Willis Kirk... Jazz great who played with Charlie Parker!

A little departure from my usual outdoor/adventure work,  but the opportunity to shoot Dr. Willis Kirk, who had played with Charlie Parker in the hey day of Jazz was alluring!

Jazzed magazine gave me a shot to shoot cover and story images for Kirk in SF last month.  The location was changed last minute from his studio to his home, and the shooting space proved to quite small, with a drum kit to boot.

We used an octa high above with a profoto head, along with a couple small flashes to light up his
drum set.

Dr. Willis Kirk is a great guy, and I loved hearing some of his stories of his days playing jazz in SF during the '40's..... 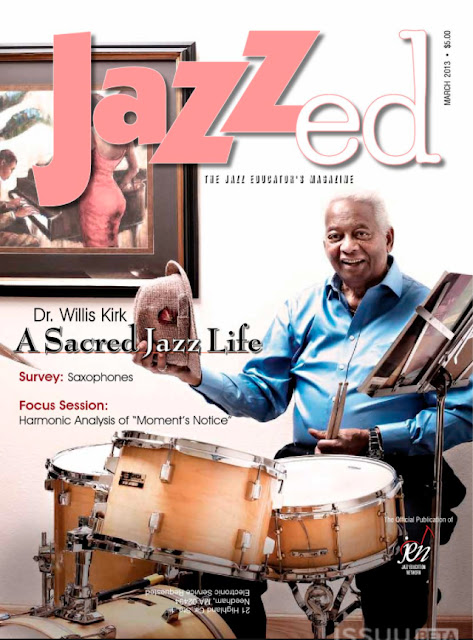 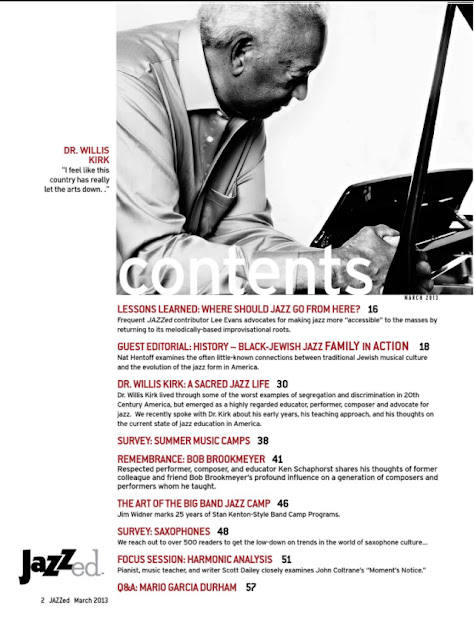 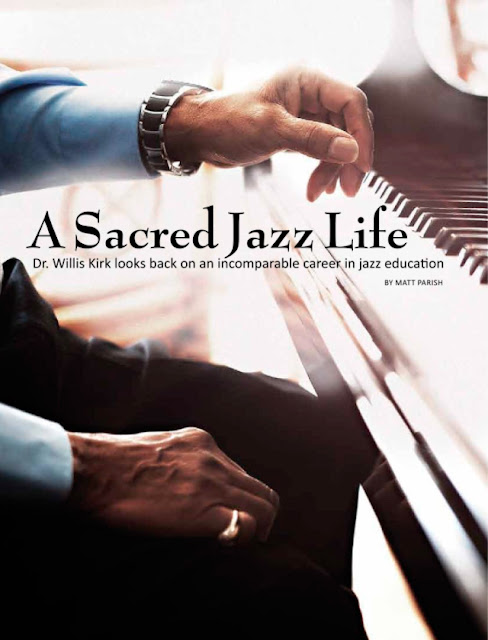 Posted by Unknown at Wednesday, April 17, 2013
Email ThisBlogThis!Share to TwitterShare to FacebookShare to Pinterest